It’s hard to go it alone. You could spend hundreds of hours casting over VODs in your bedroom and no one would know that you are the next MonteCristo or Sadokist, so how do you find an audience? To find an audience for your casting, you can look to explore two demographics who will help you advance your interests.

If you’ve picked a specific game over which you’ve been casting VODs and practicing for a while now, consult various sources to see what kind of organisations exist in the amateur scene to bring people together in less high-stakes competitive environments. You might be able to find these via subreddits, talking to players, research via search engines or Discords related to the organisations.

For my particular game, Overwatch, using the r/competitiveoverwatch subreddit I was able to find various amateur leagues to look into, most with open discords that anyone could join. The Overwatch University League, Overwatch Scrub Cup and Avengers of Overwatch organisations made good starting points, each with events that I was free to cast after contacting the admins. There is potential you may even be allowed to just spectate their event games without broadcasting to twitch or elsewhere and just cast to yourself, or potentially in Discord to other community members.

When integrating with these communities is also the first chance you’ll get to potentially find a co-caster with whom to work as people looking for similar opportunities meet in these organisations, we’ll discuss co-casters a little later. If you don’t have the means to broadcast to twitch yourself with commentary, it’s always worth asking if another community member would be willing to sit in Discord or in a call with you and stream their spectating of the game with your casting over the top.

Communities of casters, producers and other esports related content producers will be a rich resource for you moving forward, and the BroadcastGG community is a great place for any amateur caster to come and establish themselves amongst peers and friends.

Finding a community of broadcasters and people who share your goals and interests gives you access to a lot of minds that you should be using to your advantage. If you’ve recorded your VOD casts, there should be avenues available to get feedback on them, I suggest cutting out a ten-minute segment you want to have reviewed and asking for interest. This is also going to be one of the best places to find a co-caster who suits your own style due to a more diverse pool that could compliment your talents.

Integrating yourself into these communities will also help you keep an ear to the ground for casting opportunities as people may ask for a co-caster or extra staff to help out in events where they have found themselves work. I would advise taking almost every opportunity you have the time for that fits your skillset, every event means exposure of your casting and skills, even if it lacks an audience you will still be noticed by event organisers who may be able to offer future exposure.

As we discussed earlier, almost every professional cast in esports involves at least two people and that is for a multitude of reasons. Firstly, games and matches can be incredibly long-winded affairs, especially in the closer games. Halving the vocal workload by having two casters allows each to last longer and save their voice, you don’t want to be exhausted and suffering with a sore throat and lost voice midway through a tournament! Secondly, casting with two people allows a conversation to take place instead of a monologue, and a conversation between two people and the audience is far easier to help engage the audience in the casting than if one person consistently monologue at them.

Having two casters also allows for a more consistent flexibility in tone and energy, this is why you usually see pairings of a play-by-play caster and a colour caster. Using the archetypes we mentioned earlier the play-by-play caster is more focused on conveying hype, emotion and raw narrative of the game by commentating in the more intense moments such as team fights. Alternatively the colour caster is usually the more information and analysis based member of the casting duo, they shape the narrative of the play-by-play caster by giving context to the actions which happened before, explaining decision making by the players or teams and giving the audience insight into the professional mindset and game style.

You may already know whether you want to be a colour or play-by-play caster from your VOD casting or by taking inspiration from a favourite caster you’ve watched, if so, when you find a community where there is an opportunity to work with a partner, you’ll want to try and find someone who fits the opposite skillset to yours. It is by no means mandatory to have these defined roles between casters and you can always co-cast with two play-by-play casters or have a colour caster shift into a more classic play-by-play role. The most important part of finding a co-caster in your communities is simply to rack up the hours casting with another person, to allow you to get used to and manipulate the flow of conversations between yourself and a co-caster to facilitate an engaging conversation for an audience.

You will likely find that you end up casting with a lot of different people at the amateur level, and not all of them, maybe even very few, will have inherent chemistry with you. It is okay that not every cast will have smooth synergy, but building up relationships with other casters will help you to understand your own strengths and weaknesses and potentially find you a good partner you could call a long-term co-caster. If you find someone you enjoy working with, be sure to always offer them the first chance to cast with you at any events you find needing a caster and they may well return the favour to you as well. Through working many events and casting many sets together, natural synergy will be augmented with an increasing knowledge of each other’s habits and a familiarity in conversation that will function to draw the audience in to the ‘friendship’ the two of you display in your cast. Eventually you may come to be known together as a duo in casting, and good branding as a caster is often cemented on a good reputation as a duo. Working with a consistent partner will bring consistent quality to your broadcasts and will help you find more opportunities, even alone.

Developing your style as a Caster:

So you’ve practiced, potentially found yourself a community in which you can find regular live-hours of casting and you wonder how you get ‘better’ at casting besides further practice. Casting is an art form, and like any other art, what makes casting ‘good’ is subjective and the judgment of each individual audience member. If you want to be remembered not only as a good caster but also as an individual whose casts are worth listening to, you need to develop your own style based on your particular talents.

To develop your own style, you should look back at your VODs, and recordings potentially from events like Scrim Nights which you have casted, ideally with other people to give you feedback as well and identify which parts of the cast were most enjoyable for them. What was it about your performance that stood out? Of course it should not only be your peers feedback that decides your style, but what you enjoy doing most as a caster. Do you enjoy deploying metaphors, references and tropes and relating them to the gameplay at hand to try and invest the audience in the narrative by relating it to things they know from popular culture? Do you think your analysis is valuable and insightful due to a high level of game knowledge? Perhaps you think that the research you put into the teams and tournaments before a cast gives you an edge in making the audience feel like you’re an ‘insider’ who gives them a precious glimpse into the little known or specialized personal knowledge of the players? Everyone loves a good story, and you need to figure out your optimal way of telling it with your skillset. Unfortunately when it comes to developing your style, there’s not much blanket advice that can be given due to the desire for a unique appeal, so this should be summarized with the ancient adage: You do you.

Okay, I’ve practiced over VODs; I think I’m ready to do it for real. How can BroadcastGG help me?

Well, voice that I wrote, I’m glad you asked. Not only can BroadcastGG help you find a co-caster and a community that will give you all the advice you need to develop your own style, we also have some events that can help you get hours on the board live-casting games.

Every night we hold a BroadcastGG ‘Scrim Night’ where we follow teams whom we have established relationships with into their scrims against opponents and cast their games in a Best-of-Five format to our twitch channel. The nightly schedule means there is usually a scrim at least once a week you’ll be available for and we try to share out opportunities so everyone who wishes to can have a go weekly. Currently it’s mostly NA timeslots due to primarily NA-based staff for Scrim Nights, but we’ll soon be establishing connections with EU teams as well. Not only will Scrim Nights get you valuable experience broadcasting but also expose you to an audience built through the consistent content who may come to recognise you and your style if you have consistent good performances. The recollection of your name associated with casting is invaluable as a resource because you never know where those members will pop up in relation to other events.

Further offerings of the community include channels for feedback on your casts, including constructive critique of your Scrim Nights broadcasts and areas for discussion on casting technique. We also have areas that will give tournament organisers and potential employers the ability to offer events and jobs in an easily digestible format for new casters that will help you understand if you’re suited to an event. 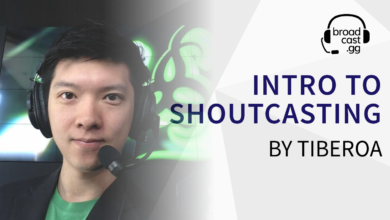 Introduction to Shoutcasting: Definitions and Goals 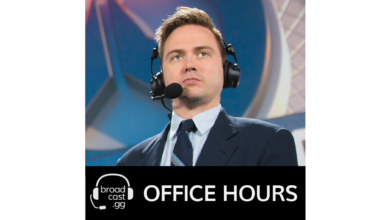 Caster Synergy and Calling with Confidence with Hexagrams 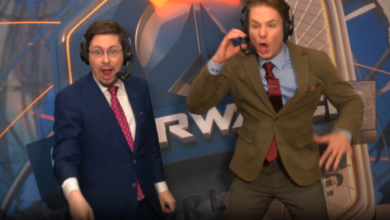 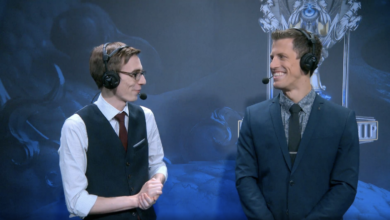 Discussion Between the Teamfights